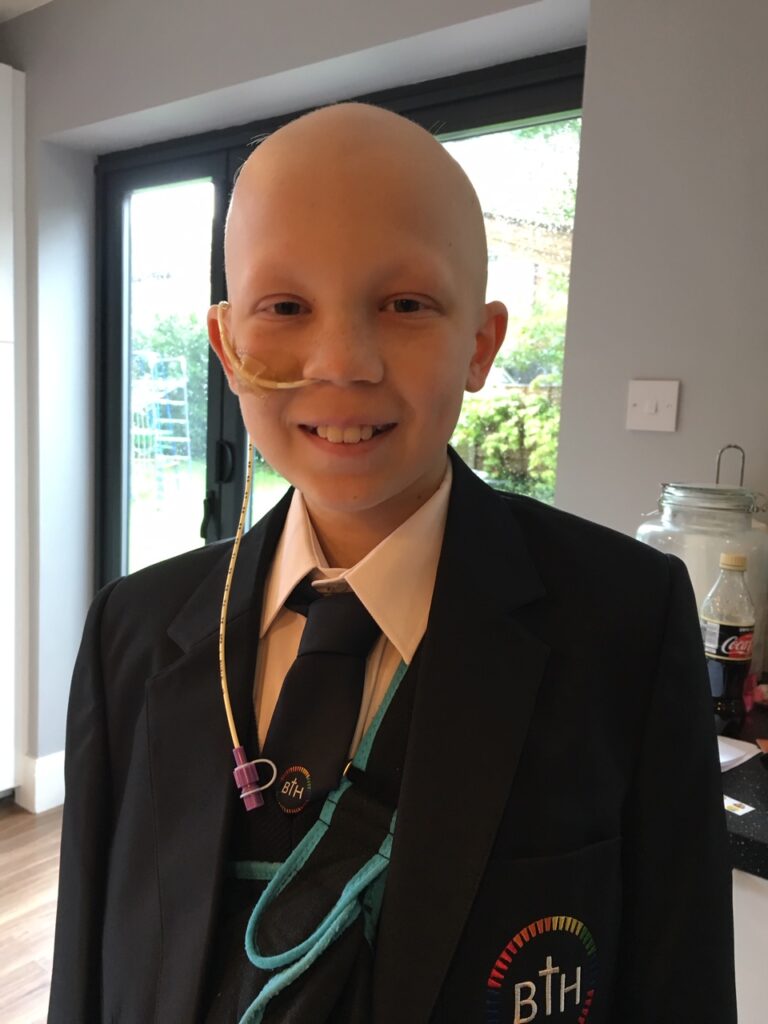 Jude Anderton was 11 years old when he was diagnosed with bone cancer. He went from a happy, highly active boy to being desperately ill in such a short space of time. His mum, Helen, shares his story to help raise awareness for childhood bone cancer and the vital need for more research:

“I remember it was the same week as Valentine’s Day when Jude first complained of arm pain. He was a super active 11-year-old boy who loved gymnastics and swimming. As the eldest of four boys, he set the standard for the others and enjoyed competing in sports. He came home from school and said he hadn’t thrown the ball well that day and couldn’t understand why. He also said his arm was feeling achy.

“We left it for a week or so, but Jude was still complaining of aches and pains in his arm. We went to see the GP who thought it could be a strain and advised rest and paracetamol for a couple of weeks. However, the pain very quickly became excruciating with swelling in his arm. He stopped eating and couldn’t sleep so we took him to the local walk-in centre. The GP who saw him was concerned and sent us to the children’s hospital for an X-ray.

“Being a nurse, I’ve seen plenty of X-rays and from the other side of the screen, even I could see a huge mass on Jude’s arm. The A&E consultant said that he thought it could be bone cancer, but we would need a CT scan, MRI, and biopsy. After those tests, it was confirmed, and we were told the cancer had already spread to Jude’s lungs. He had 30 deposits on his lungs and the tumour in his arm was 15cm.

“Everything moved very quickly from then. The oncologist said that Jude’s treatment would be exceedingly difficult and gruelling. He may need an amputation and his cancer would be difficult to cure.

“In my job I’ve treated adult cancer patients, so I knew what treatment was like, but I’ve never seen anything like this. The treatment was horrific. Jude quickly lost his hair. His mouth was full of ulcers, in fact, I wouldn’t even call them ulcers. The inside of his mouth and tongue were covered with blisters and he had to have IV morphine for the pain. He couldn’t walk, couldn’t eat, and had to have an Ng tube to feed.

“The network on the ward at Manchester Children’s Hospital was amazing. The kids are so sick they haven’t even the energy to make friends, but for the parents the support was invaluable.

“Jude went through two rounds of chemotherapy and was most worried about the thought of losing his arm. We went down to Birmingham Children’s Hospital for his surgery. The tumour took seven hours to operate on but they managed to save his arm and Jude was over the moon. He really took to the physio and even started talking about the Paralympics. He even did some fundraising for the Bone Cancer Research Trust raising a huge £176,000 making hama bracelets and encouraging others to fundraise.

“After his end of treatment scans, they thought they had cleared his arm and said Jude could have Christmas off. The cancer hadn’t reduced in his lungs, but the focus was on the tumour in his arm for the time being and the lungs would be tackled later. There were still lots of uncertainties.

The cancer was back

“But Jude’s arm pain returned, and his arm and hand started to swell. We went for another scan and it was all back. The cancer had grown in his arm and his lungs. We were devastated. It was then we were told that they wouldn’t be able to cure Jude.

“We started on a trial at Birmingham Children’s Hospital. He coped well with the first two cycles but on the third cycle, he was just too ill. The consultant said the cancer was just too aggressive and they couldn’t get on top of it.

“We were able to take Jude home with the support of the Macmillan team. The tumour on his arm was just huge. I’ve never seen anything like it. It was as if it was taking over his body. He had two syringe drivers for pain relief and was on oxygen because his pain was so severe.

“At the end of his treatment, we bought a puppy and, just four days before he died, he still insisted on going out in his wheelchair to take the puppy for a walk. “

“He was a real trailblazer and even at such a young age, he was passionate about raising awareness and making a change. What he went through was horrific. There has to be a way to give children gentler, less gruelling treatments. He received the same treatment for bone cancer as children in the 1970s. Treatment hasn’t moved on or improved for 40 years. That’s just not good enough.

“His younger brother, Finlay, said, “I wasn’t made to be the biggest brother. I was meant to follow Jude.”

Please donate today to help other children like Jude. We fund research into gentler, more effective treatments for childhood cancer. Please help us do more.