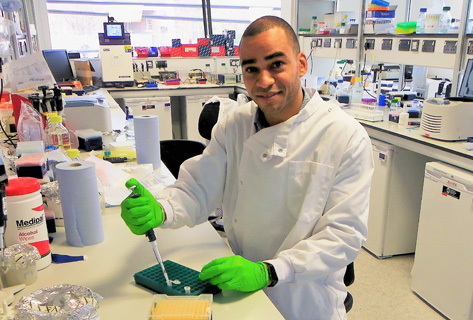 Over the last year we have funded a £65,000 project, conducted at the Manchester Cancer Research Centre facilities on The Christie campus in south Manchester, to research the use of immunotherapy to treat childhood brain tumours that have a poor prognosis.

The project is investigating the feasibility of using cells called Tumour Infiltrating Lymphocytes (TILs), created by a child’s own immune system, to shrink or destroy brain tumours in children.

Dr Gray Kueberuwa, lead Friends of Rosie funded researcher, reveals the findings from year one of this research, “Within tumours there is a constant battle. The immune system attempts to destroy tumours, while tumours attempt to adapt and evolve to survive this attack. In children that develop tumours, the immune system is losing the battle.

“The past twelve months of this project have focused on four key areas. Firstly, we needed to adapt our methods to the use of small numbers of cells. When removing a tumour from a child’s brain it is clearly of the upmost importance not to inflict damage. This is often the barrier to surgeons being able to remove the whole tumour. Then, once removed, the majority of the tumour will be used by the diagnosing doctor to characterise the type of tumour and therefore, the types of treatments that stand the best chance of working. This leaves just a small sample for our research.

“So we needed to come up with an effective way to grow more TILs in the lab. We did this by using other tumour types, such as breast cancers, to identity the best conditions for growth. We then obtained two childhood brain tumour samples and applied these techniques to grow more TILs.

The next stage of the project was to better understand the component parts of the TILs using a process called cytometry. Says Dr Kueberuwa, “During this project we were able to use the most advanced technology to analyse the cells. This allowed us to identify the immune cells present in the brain tumour samples in a way that has not been possible before now.”

The final step was to see how the lab-grown immune cells affect the tumour. A new and advanced measurement method was used which showed that TILs activated their cell-killing mechanisms when they were in contact with tumour cells, providing evidence that they could potentially be developed as a therapy for paediatric brain tumours.

These promising first year findings led to the Friends of Rosie Scientific Advisory Board (SAB) recommending a further grant of £66,500 for this project. Says SAB Chair, Professor John Hickman, “The results we’ve seen so far provide evidence that TILs could have the potential to be used as a therapy for rare childhood brain tumours. This second year of funding is needed to investigate whether the results seen so far are reproducible in other types of childhood brain tumours, particularly those with very few treatment options.”