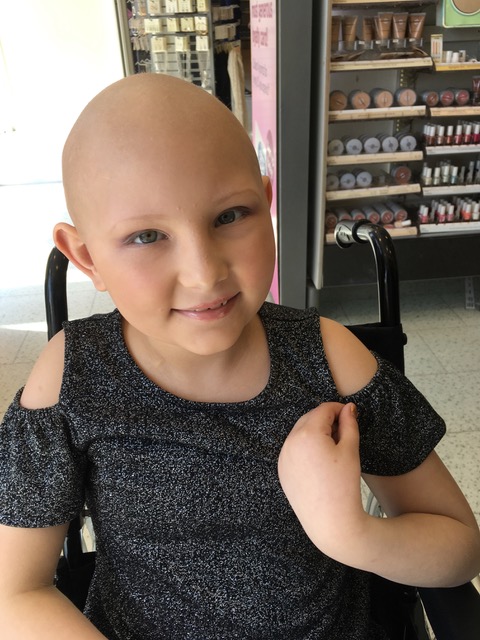 This Childhood Cancer Awareness Month, we’re delighted to introduce Ruth Grace Crosby as our first ever Friends of Rosie Young Ambassador. Ruth Grace was diagnosed with osteosarcoma, a type of bone cancer, when she was eight years old in October 2016.

As a Friends of Rosie Young Ambassador, she’ll be supporting the charity in promoting the work we do, suggesting and carrying out new fundraising initiatives, and sharing her experiences to connect with other children who have gone through or are going through cancer treatment.

In addition to becoming our Young Ambassador, Ruth Grace’s mum, Joanne, wanted to share her story to help raise awareness of the vital need for more childhood cancer research. Particularly the brutal side effects from current treatments, which severely effect Ruth Grace’s quality of life today.

“We were on a family holiday when Ruth Grace complained her legs were sore and tired when she was swimming. We put it down to all the activity we were doing. She also banged her leg and it took her a couple of days to walk properly on it.

“We returned home and got back into the school routine. But Ruth Grace was still complaining of sore, achy legs and she started getting upset and nauseous at night.

“Not long after, she walked into our cast iron bed, which resulted in excruciating pain and a lump on her leg. We gave her lots of pain relief and thought the lump would go down and heal. However, two days later, the school rang to say she was not well, so I made an emergency GP appointment.

“The moment the GP asked Ruth Grace to leave the room so he could talk to mummy alone, my heart just sank. He thought the lump was suspicious and needed investigating. We were sent for an X-ray first thing in the morning. Our world was collapsing.

“That night, Ruth Grace once again bumped her leg and was in excruciating pain. So, we headed into children’s A&E and were admitted overnight for morphine and checks. She had bloods taken, another X-ray, and an MRI.

“At that stage, we were told it could be a bone infection. We started to relax and hope that it wasn’t serious after all. However, the orthopaedic consultant soon came to talk to us and said they thought it was cancer and Ruth needed a bone biopsy.

“However, the biopsy couldn’t be done at the local hospital and we had to go to the Royal Orthopaedic Hospital. This meant our family was split up, leaving our youngest at home with family, so mummy and daddy could be with Ruth Grace. We would be contacted in two weeks after her results had been looked at.

Our daughter had cancer

“When the phone rang a week earlier than expected, I just knew. It was confirmed – our daughter had cancer. Things started to move very quickly. We were admitted onto Ward 84 at The Royal Manchester Children’s Hospital.

“Ruth was given a Hickman line and chemotherapy started.  She had MAP chemotherapy, which includes methotrexate, cisplatin, and doxorubicin. All these drugs have horrific side effects, both short and long term.

“We were told she would also have surgery to remove part of the bone. Thankfully, the cancer had not spread to any other parts of her body.

“Ruth Grace was sick from day dot. She vomited throughout the chemotherapy, even with strong anti-sickness medication. Within three weeks, she had lost all her hair. Her mouth was full of blisters, which made eating excruciating, if not impossible.

“To make matters even worse, Ruth Grace had a rare and life-threatening allergic reaction to one of her chemotherapy drugs. The condition is called Stevens-Johnson syndrome and caused her body to be covered in deep tissue blisters – inside and out. She needed oxygen support, catharising, and one-to-one nursing care.

“I broke down that night when we were told by the doctor that they were unsure if she would pull through. It all depended on how strong her body was and how hard she could fight. For three days it was touch and go. Then it was like a switch flicked and she powered on and the next day was sat up in bed.

“Her allergic reaction meant her treatment plan needed to change.  She could also no longer have immunotherapy. It felt like her chances were dropping by the minute, as there were no other alternative drugs out there.

“When the first part of her chemo ended, she was booked in for surgery with a bone graft from coming in from Miami. Her surgery took over eight hours, during which they took out all her tibia and found 95% necrosis of the bone. She was in intensive care for two days on oxygen support. She stayed in a full leg cast for some time and once the bone showed signs of successfully grafting, her chemotherapy started again.

“However, the chemotherapy stopped the graft from taking and the skin from healing. It also caused her gums to bleed, and horrific nose bleeds that could last for up to four hours! She also suffered from hearing damage.

“The side effects were relentless. Ruth could not get out of bed. She had an Ng feeding tube to give her nutrition, as she was still being sick. The constant vomiting was causing lots of damage to her teeth, but even toothpaste made her vomit.

“She endured a further 15 weeks of intense treatment. Her health continued to decline, and her kidneys shut down. Ruth needed lots of support to keep her body going, with over 30 blood and platelet transfusions.

“Finally, Ruth’s chemo finished, and she started doing physiotherapy to help her mobility. However, she never managed to walk properly, and was still in so much pain.

“After nearly two years of persisting with physiotherapy, an MRI scan eventually revealed why Ruth Grace could not walk. The bone had not grafted at the knee joint. The internal metal screws had snapped, and her bone was just floating in her leg.

“It was another huge blow. We were presented with three options – another bone graft, a titanium graft, or amputation. Aged just ten years old, Ruth Grace told them to take her leg off.

“She’s a very bright, switched-on girl and was thoroughly counselled through the options. For her, this was the way forward. A leg that would never work properly and cause pain, or no leg and getting back to being a child. She was so brave and articulate. She explained to people that an amputation now meant she had a lifetime to adjust. The alternative could be facing the same when she was older and should be enjoying life’s milestones like university, her wedding day, or becoming a mum.

“At the end of June 2019, the amputation took place. She was the last ever patient at the children’s ward at the Royal Orthopaedic Hospital. She battled hard and was up and moving on her crutches and home within 2 weeks.

“She started the process of learning to walk again and was fitted with a prosthetic leg. Now, aged 12, she is doing amazingly. She returns to school in September and has managed to keep on top of her schoolwork, despite all she has been through.

“We’re now on six-monthly scans and there is no sign of the cancer reoccurring or any spread to her lungs. This is the first time we’ve really felt ready to talk about what Ruth’s been through and share her story.

“The treatment has been brutal and has left Ruth with so many side effects. She has lost some of her hearing and suffers with severe tinnitus, both of which make her dizzy and nauseous. The treatment has affected her kidneys. She has constant kidney infections and early stage liver damage. In the next few years, she will have several dental procedures as her teeth are so severely damaged from all the sickness.

“There are so few positive stories for osteosarcoma, as the statistics of survival are so poor. There have been no advances in osteosarcoma treatment for over 40 years. MAP chemotherapy is particularly gruelling for children. There must be some way of ensuring better survival rates and of reducing these awful side effects to give children a better chance of a happy, healthy life after treatment.”

Thanks to our Young Ambassador

Our huge thanks to Ruth Grace and her mum, Joanne, for sharing her story and helping to raise awareness for childhood cancer research. We’re very excited to work with Ruth Grace in her role as Young Ambassador.

Donations help us fund more life-saving and life-changing research. Please donate whatever you can to help more children like Ruth Grace.

If you’d like to join Ruth Grace and become a Friends of Rosie Young Ambassador, please just get in touch.