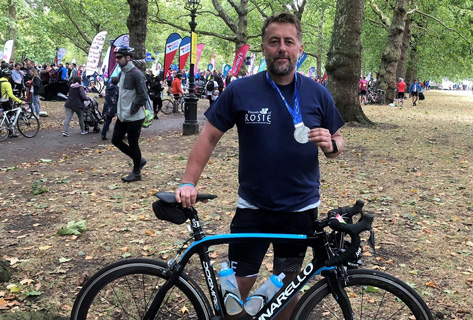 A few weeks ago, on one of the only wet and windy days we saw during July, Richard Woodhall set out on the Prudential Ride 100 London to Surrey in support of Friends of Rosie.

Now in its sixth year, the Ride 100 attracted thousands of cyclists to the roads of London and Surrey and 22,142 participants succeeded in completing the event in drenching rain, many dripping from head to toe and streaked with mud as they cruised, soaking and thankful over the Finish Line on The Mall.

Richard did Friends of Rosie proud on the day, despite getting soaked through and having to fight against the windy conditions. He’s raised a fantastic £676.25 for children’s cancer research in the North West for which we are hugely grateful. His Virgin Money Giving page is still active if anyone would like to give him a pat on the back for his efforts at the Prudential Ride 100 and donate – https://uk.virginmoneygiving.com/fundraiser-display/showROFundraiserPage?userUrl=richardwoodhall1&pageUrl=4

Said Richard, “It was a wet and windy ride but also lots of fun and I’m really pleased to have raised so much for Friends of Rosie to help children with cancer. Thank you to everyone who donated.”

Celebrating the legacy for cycling created by the London 2012 Olympic and Paralympic Games, Prudential Ride 100 London-Surrey starts from 05:45 in Queen Elizabeth Olympic Park, then follows a 100-mile route on closed roads through the capital and into Surrey’s stunning countryside. With leg-testing climbs and a route made famous by the world’s best cyclists at the London 2012 Olympics, it’s a truly spectacular event for all involved.