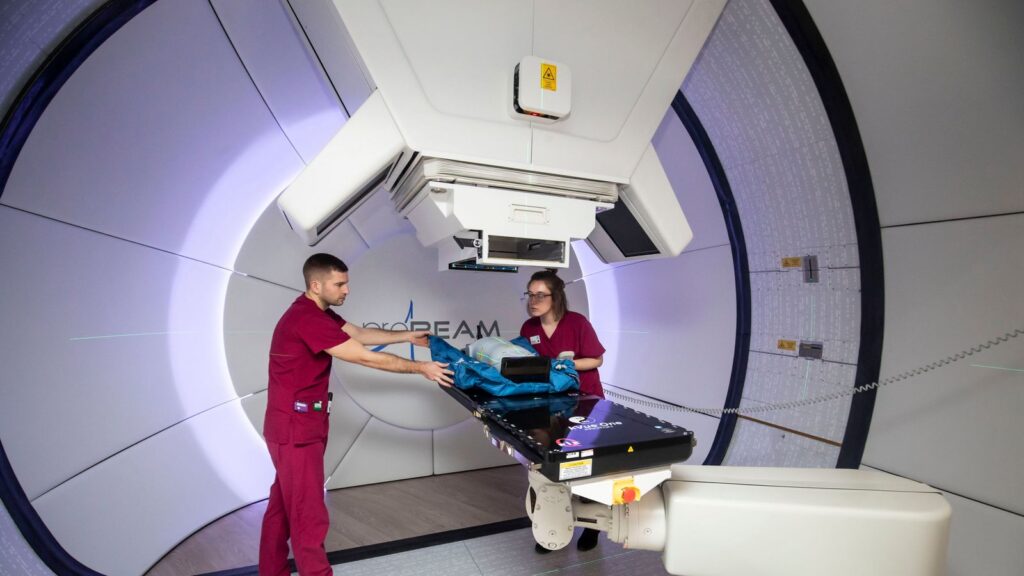 Friends of Rosie is funding a £70,000 project investigating the biology of protons used in Proton Beam Therapy (PBT) to treat sarcomas in children. We recently met with lead researcher, Dr Amy Chadwick, and Research Associate, Dr Emma Biglin, to find out more about this pioneering research.

Sarcomas are cancers that develop in bone and soft tissues anywhere in the body. They require careful, personalised treatment. PBT is an advanced type of radiotherapy using a high energy beam of protons to precisely target a tumour, minimising damage to surrounding healthy tissue. 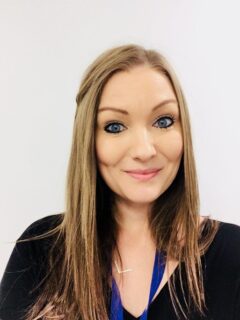 Says Amy, “Whenever radiotherapy is used to treat patients, there is an entry and exit dose of radiation. In all cases, you want to keep the dose of radiation to surrounding healthy tissues to a minimum, so as not to damage the healthy tissue surrounding a tumour. Protons slow down and release most of their energy in a well-defined area within the tumour, meaning that there is no exit dose. With PBT, we can provide a more targeted radiation dose to the tumour whilst delivering less dose to the surrounding tissues. This reduces the risk to critical organs close to the tumour, reducing the chance of long term side effects of treatment and reducing the likelihood of radiation-induced cancers occurring in later life.

“I’ve been working with the PBT team since 2015. In fact, the group to which I belong, designed the dedicated proton research facility at The Christie NHS Foundation Trust. Within the Proton Therapy Centre, there are three gantries for treating patients and the fourth area is dedicated to research. With funding from the Christie Charity we designed the proton beamline in this area, the control room and a biology lab to allow us to perform cutting edge experiments in a hospital setting.

“Our research beamline has a clinical spot scanning nozzle so we can emulate patient treatment. We also developed a radiobiology end station containing a robotic arm to allow us to irradiate multiple samples to maximise the time we have available using the proton beam. Using this, we can accurately control oxygen levels, mimicking that found in tumour and normal tissues down to 0.1% O2. We think this is the first hypoxia workstation in the world designed for proton research.

“Being able to control the oxygen level is key to our Friends of Rosie work. Low oxygen concentration in tumours is one of the main factors that causes resistance to radiotherapy. When tumours grow, they outstrip their blood supply, so they grow their own supply but this leaves areas of the tumours with low oxygen levels, called hypoxia. Tumour cells exposed to hypoxic conditions are 2-3 times more resistant to radiotherapy, compared to well-oxygenated cells. In the PBT research facility, we can mimic this low oxygen environment so we can accurately test different doses of radiation and different drug combinations in what would be the most radio-resistant conditions.”

The main aims of the research project are to: 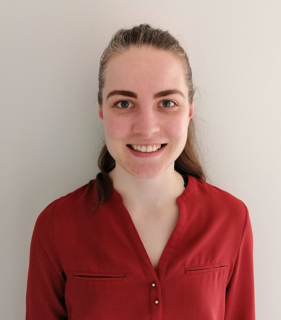 Adds Emma, “Over the past few months, we’ve done a lot of the groundwork needed to now start the proton experiments. Firstly, we need to obtain our benchmark data using the paediatric sarcoma cell lines with conventional radiotherapy to assess how many cells survive after different doses of radiation. The cell lines we’ve tested represent osteosarcoma, Ewing sarcoma and rhabdomyosarcoma. We recorded data under normoxia conditions (21% oxygen) and hypoxia (0.1% oxygen).

“Secondly, we conducted experiments to quantify DNA damage using radiotherapy, by recording the proteins recruited to repair the DNA damage within the cells. Again, we did this with varying oxygen levels.

“Now, we’re identifying different drug combinations and measuring cell survival after treatment. Once this work is complete, we can start our first experiments with protons.”

Amy continues, “As the PBT centre is being used to treat patients during the day, we can only conduct our experiments in the research facility at night. We’ve booked our first experiments to start in June and the priority is making best use of the proton beam while we have access to it.

“In addition to this research, we’re also looking at how we can use 3D cell models to represent a tumour more accurately. At present, we use cells in a monolayers in flasks or in multi-well plates. Now we’ve managed to generate 3D models, so we can more accurately measure the extent of hypoxia following different doses of radiation and also test drug combinations to see if we can shrink the hypoxic area.”

More than half of PBT patients treated at The Christie are children, with sarcomas accounting for approximately 20% of the paediatric caseload for the NHS PBT service. . There is currently no dedicated research into how paediatric sarcoma cells respond to PBT. This project will change that.

Concludes Amy, “So far, Proton Beam Therapy has largely been driven by the physics. With this Friends of Rosie funded research, we are driving forward the biology to show that cells respond differently to PBT than conventional radiotherapy. There is great opportunity to exploit those differences and look at how we can make treatments more effective and kinder to patients. For children with cancer, that’s even more important to give them a far better quality of life after treatment.”